New countertops are one of the most expensive items in a remodeled kitchen. So when a consumer pays a premium for a Quartzite Countertop with assurances that Quartzite is a superior product to other countertops because it is essentially maintenance free, the consumer expects to receive Quartzite.

Quartzite is a 100% natural stone that comes directly from the earth. It is mined in several locations in the world. The most famous quarries are in Brazil. However, Quartzite is also mined in the United States, Sweden, Canada and Italy. Natural Quartzite is very durable. It is not affected by harsh weather or UV light.

Currently, Quartzite is highly desirable. However, an unfortunate side effect of this desirability is the temptation to sell stones as Quartzite when they are not actually Quartzite. Thus, Quartzite is commonly mislabeled, which has resulted in widespread confusion about the properties of the stone. So-called “soft Quartzite” is usually marble, which has entirely different properties than real Quartzite. Simple diagnostic tests can be used to differentiate Quartzite and marble. Furthermore, some sandstones are sold as Quartzite, which further adds to the mix-up. Sandstone and Quartzite have the same mineral ingredients (quartz), but Quartzite has much lower porosity.  Thankfully, it seems that both industry pros and consumers are becoming more discerning about what Quartzite truly is, or is not.

However, a recent consumer, who is not an industry pro who purchased what he thought was Quartzite from Daltile, the nation’s top tile manufacturer, discovered that although he paid for Quartzite, he received something else. In fact, after leaving a whole pineapple on his countertop, the consumer later discovered a stain. Something that is not supposed to happen. 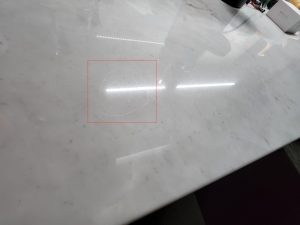 The same consumer also learned the hard way that leaving a bad tomato inside a package packaging could still cause stains on his counter. 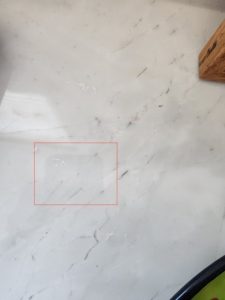 Sometimes, manufacturers blame stains on “sun damage,” something that should not be an issue with real Quartzite. As one consumer explained,

“I’ve also managed to get a hold of original fabricator and I’m running into further problems with him. He’s now saying that it was the sun that ‘burned’ the quartzite and therefore not his fault. . . . I still think that this is his fault as he knew exactly where the counter was being installed and advised us to get Quartzite. He should have known it would ‘burn,’ if that’s even possible.”

Another consumer noticed a large discoloration on his kitchen counter, near where the counter met the stove. The consumer stated:

“Now the counter has a dark discoloration along the edge that meets the stove. I’m not happy that the installer didn’t leave the same space along each side but I thought I’m just being overly picky. The discoloration didn’t show up until months later. But now as I read up on quartzite I think the heat from the gas stove top made the discoloration. Any advice would be appreciated. Does anyone know how to fix the discoloration? Has anyone else had this happen?”

If you purchased Quartzite from Daltile, or any other manufacturer, and then started experiencing issues with the look of your countertops, it may be because despite paying a premium for Quartzite, you actually received a countertop made from a different material. It may be worthwhile to contact an attorney who is best equipped to explain your options.

For its part, the national plaintiffs’ firm Cafferty Clobes Meriwether & Sprengel is investigating Daltile’s and other countertop manufacturers’  dishonest sales practices, and would be happy to take your call to discuss the matter with you if you were impacted. If you purchased Quartzite from Daltile or any other manufacturer, and are now experiencing problems with the countertop, call or contact Cafferty Clobes Meriwether & Sprengel.