Does it feel like your Hyundai Elantra engine is a ticking time bomb? If you drive a 2011-2016 Hyundai Elantra you may have noticed that the engine makes a loud ticking noise. Users have observed that the 1.8 L 4-cylinder “Nu” Engine that Hyundai began using in 2011 has regularly failed its owners. 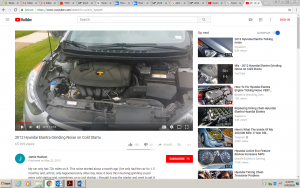 This clicking noise has been observed in some cases as early as when the owner drives the car off the dealer lot.  The clicking noise generally comes from the passenger side of the engine.  The ticking sound in Hyundai and Kia engines gets more prominent as the driver accelerates. One consumer reported that the car “vibrates” so much that a bottle of water will start splashing around in the cup holder, and others have even reported that the steering wheel will vibrate. Consumers have pointed out that the shaking becomes worse when the heater or air conditioning is turned on.  Owners have also noticed hearing clicking sounds after the car is turned off.  Most importantly, Hyundai and Kia owners experiencing engine and transmission issues in Vehicles like the 2013 Elantra have reported the car shutting down when stuck idle in traffic.

When inspecting Hyundai and Kia vehicles using a Nu engine, especially Hyundai Elantra vehicles following reports of stalling, ticking or vibrations emanating from the engine, a mechanic will often see that metal shavings break off from the engine, and goes into the oil. Pieces of metal appear from the oil when exposed to a magnet. Changing the oil does not fix the engine problem in Hyundai ad Kia vehicles. Hyundai will first replace the oil filter , but that often proves to be an insufficient fix. The next step is replacing the engine. A new engine can cost around $5000. Owners have often chosen to trade in their cars or get new cars rather than to pay this exorbitant amount for a shoddy engine. There are lots of drivers who have been forced to drive replacement cars while waiting for their cars to get fixed. Even worse, the problem has been known to re-appear in under a year as Hyundai simply replaces one bad engine with another bad engine.

However, some fix is necessary, as the Nu engines used in vehicles like the Kia Forte and Hyundai Elantra can put the driver in serious danger as the car can stall when the driver attempts to accelerate. Drivers have noticed a loss of power in the engine when trying to gain speed, terrifying drivers as the car sits motionless when the driver’s foot is pressed down on the gas pedal.  Such problems are extremely dangerous when trying to merge onto highways or to change lanes.  Owners have reported having cars break down on highways, leading to the stress, hassle, and cost of getting a car towed.

The loss in acceleration power has also been observed to coincide with a loss in gas mileage. An owner of a 2011 Elantra reported that the car was falling short of the miles per gallon that Hyundai advertised.

Most car engines are designed to last well over 100,000 miles, but Hyundai Elantra owners are regularly suffering engine failures at much earlier periods in what should be the car’s lifespan. Many consumer websites are inundated with unfortunate owners who have suffered engine failure between 45,000-69,000 miles, and have noticed the car vibration in a little as 5,000 miles.

Owners of used cars have reported that they are not able to get the replacement engine under warranty.  As complaints have been rampant, drivers have reported that they have had to wait months for replacement engines while repairs were on back order.  Owners have also been forced to report that they have maintained the car according to manual recommendations, including that the owner had the oil changed every 7500 miles.

But the problem seems to be the car, not the consumer. For its part, national Plaintiffs’ firm Cafferty Clobes Meriwether Sprengel LLP is investigating Hyundai’s behavior, and would be happy to take your call to discuss any potential claims you may have.