Do you own a Kenmore oven?  Does your Kenmore oven have a model number stating with 790? If so, you may be at risk of the oven door shattering, as numerous other consumers have found out.  Indeed, the problem has gotten so bad that the Consumer Product Safety Commission, having received so many complaints, issued a statement requesting that the government to act and cause Kenmore to recall the ovens.  Just a few of these complaints include:

Kenmore oven Model 790.9745 – We purchased our house in July 2014 and didn’t notice at the time that the front glass of the oven was missing. We ordered a new glass front, installed it and a few months later, the front glass exploded and went all over the kitchen. Then we realized that must have been why the glass was missing when we bought the house. We replaced the glass again and the other day the same thing happened. Three times in three years. Each time someone was standing near the oven while it was baking at 350 degrees when the glass exploded. We were lucky no one got hurt.

On opening the Kenmore convection wall oven door, the handle was loose and when I pulled on it, the entire glass door shattered, cutting my hand, ruining food on the counter, spraying glass as far as 12′ from the oven. Using a whisk broom, regular broom and the vacuum, we were able to get most of the glass up and then we washed all of the kitchen rugs. If a small child or one of our pets had been next to me, some serious harm may have resulted. I have read about other customers having this problem and that replacing the door is not a safe option – it can happen again. It’s a serious design flaw.

This is the 3rd time I had sears out to fix stove. 1st glass blew out (scratched the whole inside 2nd circuit board/ and now again the circuit board. When you use self cleaning more than 3 times blows board. All in all I have been without the use of my stove about eight weeks. When you call for service and you give them error code. They come out (waiting a week or longer) without parts and you have to wait another 2 weeks for them to fix. Just wish they would credit me and let me buy another brand. This stove is only 1 year old. Very unhappy.

When opening oven door on Kenmore wall oven, handle fell off one side and glass door exploded into me. There were shards of glass everywhere, even countertops, and I had a small cut on my foot. The company is sending a repairman who we have to pay $250, despite all the phone calls and emails to corporate. We feel this was a defective piece of equipment, and seeing several other complaints of similar happenings, I feel we should not have to pay for service call or the repair/replacement. I will never buy Kenmore products again after this incident. And will do my best to spread the word.

Kenmore Ultra Bake Oven – So apparently this is a thing with Kenmore ovens? I was not in the kitchen when I heard a pop followed by lots of crackling. No one was near the oven, thank god. The oven is 8 years old, but we really don’t use it often and do not treat it roughly. There is no good reason why an oven door should explode. This seems to be a well-known problem and yet there are no consumer warnings on new ovens and no recalls that I can find. These ovens are dangerous and should not be in people’s homes. Kenmore should take responsibility for creating an inferior product instead of blaming this obvious defect on consumer use. Very disappointed.

Moreover, people have posted pictures of these incidents: 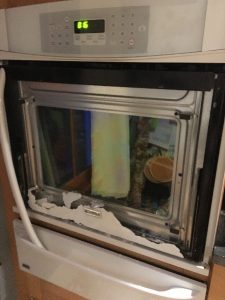 What is worse, Kenmore has denied all responsibility, and has failed to issue a recall or compensate victims for the cost of repair. Indeed, Sears­—owner of the Kenmore brand—put out a statement claiming that:

“Breakage beyond the first year following purchase is most likely due to damage caused to the glass during use.  Damage to the glass can be caused by a number of things including using the door to push in an oven rack or an object striking the glass-both examples may cause a weakness and lead to failure over time.”

This, of course, ignores the thousands of complaints by consumers who report oven doors shattering without any customer-intervention.  Thus, consumers are not only stuck with a defective oven, but have to bear the cost of repair every time the oven door glass shatters—something some consumers have experienced multiple times.  This is not what customers expected, nor paid for. Considering how much money these ovens cost, it is inconceivable that they have such fundamental problems. If you have experienced similar problems with your oven door glass either cracking or shattering completely, you should look into hiring an attorney to get back your money. For its part, the national Plaintiffs’ firm Cafferty Clobes Meriwether Sprengel LLP is investigating Kenmore’s behavior, and would be happy to take your call to discuss any potential claims you may have.