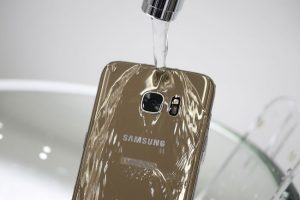 Samsung has known that its water resistance claims were dubious as early as 2016 (if not earlier) when Consumer Reports said that Galaxy S7 phones—which appears dunked in a fish tank in commercials—had failed an immersion test. Samsung claimed that the failed test was due to a manufacturing defect, which only affected a small number of phones, but customers online told a different story:

“I had my S5 Active for 3yrs and now my husband is using. Since June 1st 2017 I’m on my second S7 Active when you plug in to charge it says cannot charge due to USB device detecting moisture same as what 1st one did and will not charge at certain times so when I get charged have to keep all apps turned off in fear it maybe a day that it does not want to charge. It has never been in water the closet is on counter when doing dishes or showering. No color change where sim card is stored when I have called ATT and inquired. The first one they warrantied but they want me to file a claim on second one.”

“Same here, my S7 active got wet back in May. They took it in as a Warranty repair. They wouldn’t even acknowledge I said water damage. They just repaired it and sent it back. It has been back-and-forth a couple of times until this last time, it got wet again. This time you could see water in the camera lens, they brought it in and said for a $196 they could repair it. When I pointed out it should be under warranty they said “oh it’s unrepairable, its water damage, It’s not covered under warranty” I have now spent 2 weeks arguing with People from Samsung who won’t even acknowledge that this issue exists until I send them the documentation about it. Next they say ‘oh we have to elevate this to the next level’ and If anyone ever does call back they start at the beginning saying ‘the phone has water damage its not covered under Warranty’ In my last conversation with them I said ‘class action lawsuit looks like it’s Necessary’. They are supposed to call me back in 24 to 48 hrs.”

“I’ve been through several of Samsung’s Active series of phones and they’ve all died from water. Two in a kiddie pool less than 1′ deep and one that got a glass of water spilled on it while in my pocket. Samsung didn’t stand behind any of them, won’t buy anything with their name on it anymore.”

As both the ACCC lawsuit and consumer complaints have demonstrated, Samsung refuses to stand by their warranty claims after their supposedly water-resistant phones are exposed to water. Consequently, Samsung customers are having to pay the price when Samsung products fail to live up to Samsung advertisements. ACCC Chairman Rod Sims put it best when he said, “Samsung’s advertisements, we believe, denied consumers an informed choice and gave Samsung an unfair competitive advantage.”

If you or someone you know have been let down by a Samsung S10e, S10, S10 Plus, S9, S9 Plus, S8, S8 Plus, S7, S7 Edge, Note 9, Note 8, Note 7, A8, A7, and A5, manufactured between 2016 and 2019, due to water damage, it may be time to visit an attorney. While there is currently no action in the United States to reimburse American consumers for Samsung’s failings, Cafferty Clobes Meriwether & Sprengel LLP is currently investigating the issue, and would be welcome to speak with you about any potential claims you may have.