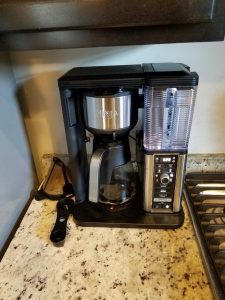 NinjaShark advertises that you can now “[b]ring the coffeehouse home” with Ninja’s Specialty Coffee Maker. However, after only a few months to a year after purchase, these coffee makers stop brewing coffee and continually beep 5 times. Despite longstanding complaints from consumers and various forums discussing the issue, NinjaShark has not done anything to permanently address the problems. Worst of all, any attempts to fix these issues, such as running a cleaning cycle, or attempts to seek warranty coverage fail or involve additional costs.

Customers report that they contact the manufacturer to advise their costly coffee bar will not brew coffee, usually following 5 beeps, only for NinjaShark to offer little more than a discount on a new coffee bar that consumers are convinced will eventually emit the dreaded five beeps of death.

“Coffee Bar worked well for first year, then started doing the same thing complained about on this site. 5 beeps would sound and water flow would stop after about 5 seconds. Had to keep pushing the Rich or Classic button constantly if I wanted to actually get any amount of coffee. Poor product. Will NEVER buy NINJA product of any kind again AND will give my strong opinion of NINJA products to any relatives, friends (or anyone that will listen) who might consider buying them.” – Ninja Coffee Bar System Purchaser

“Bought the Ninja Bar and at first we loved it. Two months in, the five beeps of death started. Called customer service at Ninja and they had me do a couple things and eventually got it running again… for a while. Now it’s doing the same thing, for the twentieth time. We clean it all the time and I’m tired of a half a pot of coffee or two ounces, if your lucky.” – Ninja Coffee Bar System Purchaser

“My husband and I got this coffeemaker about a year and a half ago. At the beginning we ABOSOLUTELY LOVED IT only to begin to hear the five beeps of death every time we tried to make coffee. We called and were given troubleshooting [sic] options that didn’t work. Then were told we were outside of warranty, there was nothing they could (would) do and basically [sic].. tough break. You would think that they would offer something more than ‘best of luck in the future…’” – Ninja Specialty Coffee Maker Purchaser

“I’ve had 3 units now – each one fails after a couple of months.  Even under warranty, it costs you money $$$.  Ninja charges you a fee like $25 or $50 (can’t remember which) every time you have the unit replaced. I just gave up and threw mine in the trash.  Getting 3 units that all fail in a couple of months means the product is poor. When it worked, it was nice and I liked it quite a bit but the poor quality and associated fees meant the unit cost was almost 2x the purchase price. I know several others that have the same issue.  Check Twitter…search for 5 beeps of death” – Ninja Specialty Coffee Maker Purchaser

If you have been let down by your Ninja Coffee Bar System (Ninja Specialty Coffee Maker) due to malfunctions such as failure to brew coffee and continual beeping, it may be time to visit an attorney. While there is currently no action to reimburse consumers for SharkNinja’s failings, Cafferty Clobes Meriwether & Sprengel LLP is currently investigating the issue, and would be welcome to speak with you about any potential claims you may have.