LG dryers are catching all the wrong things during operation.  The lint trap cover does not sit flush on the machines and this protrusion can cause a host of issues.  A similar issue is already the subject of a lawsuit involving dryers manufactured by LG, but this problem exists in the LG branded dryers as well.

Sometimes customers’ clothes are caught on the protrusion of the lint trap cover, and often times the garment is ruined as a result.  Sometimes the piece of clothing that the lint trap catches also catches the other clothes in the dryer, resulting in an entangled mess of clothes that are not drying properly and often ruined.  It is also possible that the small protrusion causes an excessive accumulation of lint in the dryer. Does any of this sound familiar to you?

“I am having the SAME EXACT ISSUE with the dryer lint filter! It is catching and RUINING many clothes. Or, an item will get caught on the right side of the filter and spin for the entire cycle, catching all other items and twisting them into a demented amalgamation of LG DRYER TORNADO HELL! HELP!!!!!! Nothing is blocking the lint screen or anything down below it! It just will not fit properly and it is bizarre!!!!” – LG Dryer Customer – 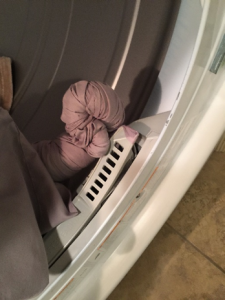 The covers protrude into the dryer instead of sitting flush.  This protrusion causes the damage to customers’ clothes and can also cause the additional buildup of lint.  The excessive buildup of lint can be very dangerous.  The accumulation of lint is a leading cause of dryer fires each year.   Of course customers are upset with the continued damage to their clothes each time they do a load of laundry.  Any piece of clothing can get caught on the lint trap cover, but delicate or intricate clothes, bedsheets and linens or clothing with straps are more likely to get caught.  Customers report losing a lot of nice clothing to these already expensive drying machines.

The costs of this issue add up quickly.  The loss of perfectly good clothing is expensive in and of itself, especially if the LG Dryer is damaging one or more items of clothing every time the dryer is operated.  Then there is the cost of any replacement lint screens customers have purchased or other repairs they paid for.  Factoring in the significant cost of purchasing these machines, the cost of repairs and replacements parts, and the cost of replacing damaged clothes; it is clear customers are receiving a losing deal with LG.

If you have experienced similar issues with your LG dryers, than it may be time to think about contacting an attorney.  There is not a lawsuit currently pending against LG for its LG branded dryers, but attorneys at Cafferty Clobes Meriwether & Sprengel LLP are investigating the matter and are already working on a class action case involving a similar issue with Kenmore dryers.  If you think you are experiencing similar issues with your LG dryer, the attorneys at Cafferty Clobes Meriwether & Sprengel LLP would be glad to speak with you.