Labor Day is approaching and with it, unofficially, summer is coming to an end.  Summer on the east coast this year has be wet, hot, and humid, resulting in a very mosquito-friendly environment.  If you enjoy time outdoors, you have probably tried every possible remedy to rid your outside space of these pesky pests—citronella candles, electronic bug zappers, or even swatting frantically whenever one lands on your body, hoping to beat the bug to the punch.  The latest trend in bug-capturing technology uses LED lights and titanium dioxide to “attract” bugs and a fan to kill them and suck them into a net when they are close.  In theory, these bug trappers are great.  LED lights provide long-lasting, environmental friendly lighting solution, and bug traps incorporating them are cheaper than many other bug control options.  They also give off a cool purple glow, and sometimes when you buy one, you get a second for just the cost of shipping and handling! 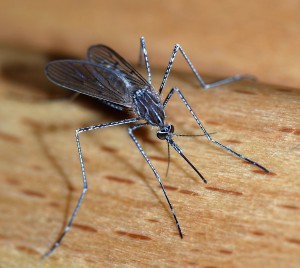 As Seen on TV! advertises the Buzz Off, and Amazon and other online sites offer similar products by other manufacturers, such as the Dynatrap.

Do these purported miracle inventions actually work though?  Many consumer complaints about products such as Buzz Off or Dynatrap say no.  The manufacturers claim that the LED lights put out ultraviolet (UV) light that attracts bugs to the trap, at which point a fan sucks them in and kills them or prevents them from escaping.  Some, like As Seen on TV’s Buzz Off, also include titanium dioxide, which the manufacturers claim also attract bugs, such as the hated mosquito, because when exposed to UV light, titanium dioxide mimics human scent.  In theory, this setup could work, but the plethora of consumer complaints indicate that these traps often do not work as promised and guaranteed.

What Is Going Wrong?

There is at least one possible culprit for failing LED bug traps, and it is related to the LED light used in the products. Based on our evaluation of these products and a variety of scientific research on the subject, we believe the primary issue with these products is that some LED lights used are not emitting the proper wavelength of light to attract bugs or convert the titanium dioxide to a scent attractive to pests.

Why Is This Happening?

Flying insects, such as those advertised to be enticed by these traps, are attracted to UV light. Products such as Buzz Off advertise that their LED-lit traps work by attracting insects through the emission of UV rays. However, most LED lights produce, at most, minimal UV light.  One reporter tells an anecdote of moths flying right by his outdoor LED lights and giving them no notice.  In fact, many LED manufacturers advertise their bulbs as a “no bug” solution. Because the typical LED light does not produce UV rays, for the bug traps to work by emitting UV light, they would have to use specific LED bulbs. Therefore, it is possible that despite advertisements to the contrary, the LED light in your bug trap is not producing the ultraviolet light necessary to attract bugs.

Ultraviolet light is also necessary to transform titanium dioxide into carbon dioxide, which is what makes the trap smell like a tasty human to a mosquito. If the LED light is not emitting enough ultraviolet light to attract insects, it is also not emitting enough ultraviolet light to convert the titanium dioxide to something approximating human smell, so this advertised method of attracting bugs also fail and consumers are left with, what one commentator referred to as “an expensive night light.”

Cafferty Clobes Meriwether & Sprengel LLP is investigating this issue.  If you purchased an ineffective LED bug trap, please contact us with details about your product.