Generally, when you buy a car and are promised a feature—like air conditioning, satellite radio, or navigation—you expect that feature to continue to work/exist AFTER you take your car off the lot. Well, this expectation seems not to be shared by the people over at Mazda, as 2016 Mazda vehicle owners recently found out.

When consumers purchased a 2016 Mazda vehicle, real-time navigation software was one of the features of the vehicle they were buying (or at least that’s what they were led to believe). In early 2016, however, that very same software stopped functioning for all Mazda vehicles. Or, to hear 2016 Mazda owners tell it:

Wife and I picked up a 2016 CX-F about a month or so ago, I’ve noticed that the navigation is having a lot of problems keeping a lock on the car. I drove about 10 or 15 miles to my doctors office this morning and the whole time the nav was shoing me either 2 or 3 miles off the interstate or it was thinking I was on a different road completely. It did this the whole way there, even going on a long straight on the interstate it would suddenly jump me off the road and took minutes to lock back on. I checked the GPS information and it was showing 7 or 8 locked sats on me and at high accuracy.

When we found out the Navigation system comes standard in the Touring package, we said great. Then we found out why its free, because it does not integrate Live traffic. Basically the Nav feature is useless to use and we have to mount our phone so we can see Waze and reroute our route accordingly. Seriously, the Nav system is trash without live traffic.

I have had my 2016 CX-5 since June. I had the system upgrade done in October after my navigation system suddenly didn’t exist anymore (this vehicle is not equipped with a navigation system – uhhh…well it was 2 hours ago!) and my radio and Bluetooth went out completely. In the last week or so, my Bluetooth has been dropping my calls regularly and repeatedly (says that the Bluetooth signal has been lost) and as of this morning, apparently my navigation system has been removed again. Though it was there and working fine an hour before. I have a call into my dealer.

[N]avigation periodically goes nuts and my car finds itself in a lake. I was hoping it had to do something with my location, but it seems that it’s a car issue. 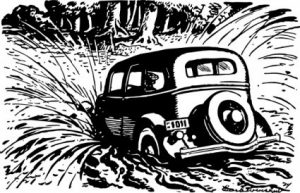 Did those consumers get their money back? Did Mazda apologize for the failure of a feature they just charged people for? Of course not!

Luckily, there are laws against this type of bait-and-switch, and if you have experienced similar problems, you should look into hiring an attorney to get back your money. For its part, Cafferty Clobes Meriwether Sprengel LLP is investigating Mazda’s behavior, and would be happy to take your call to discuss any potential claims you may have.