If you own a Nissan Altima 2013-2016 model, you may have noticed some bad vibrations coming from under the hood. Consumers have complained about problems in the Altima’s Continuously Variable Transmission (CVT), where the car will shudder and jerk, especially at low speeds.  Unlike conventional manual or automatic transmission, CVT does not involving shifting gears when changing speeds.

CVT vehicles have been touted for improved gas mileage compared to automatic and manual vehicles, as well as its smooth, gearless ride.  But consumers have reported that the car gets loud when reaching highway speeds, and unreliably sputters at low speeds.

Owners have observed that CVT causes jerking in the car, which also causes the car to struggle to reach full speed on highways, and has led to the car stalling.  Consumers have also complained that RPMs will spike while driving at relatively constant speeds. See the screenshots from the video below: 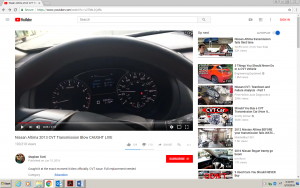 Others have reported transmissions problems while making basic changes in speeds such as stopping and going at a stoplight, as well as shifting gears from forward to reverse. Owners have also noticed the car acting up in strange situations… such as going down a hill.  In many of these situations, owners have observed that the “check engine” light did not illuminate.  Often times, owners have had to pull over and turn the car on and off again, only to have the problem start up again within minutes.

Driving a sputtering car can be especially terrifying when merging on and off of highways. Consumers have complained about the Altima’s inability to accelerate.  One Youtuber even reported having his transmission failing in the middle of a busy intersection! Others have had cars stalled while in traffic, causing expensive repairs as well as the towing costs, as well as the hassle and stress of having a car break down in the middle of the road. Car owners have observed and felt this sputtering without being alerted on their dashboards to check their engines.

Consumers have also reported that Nissan has denied acknowledging the problem in instances when consumers brought the issue to its attention. Nissan issued a recall on its Transmission Control Module, (“TCM”) for its 2013 Altima, in an attempt to improve the hydraulic pressure on the CVT. Nissan urged owners of the Altima to get the TCMs reprogramed to avoid “damage to your vehicle’s transmission.” But complaints have persisted. Currently there are 250 NHSTA Powertrain Complaints about the Nissan Altima, most of which are about the CVT. Nissan has extended its warranty on 2003 to 2010 models, but has not done so on its newer models.

For its part, the national Plaintiffs’ firm Cafferty Clobes Meriwether Sprengel LLP is investigating Nissan’s behavior, and would be happy to take your call to discuss any potential claims you may have.